On Tour with Prism Book Tours. 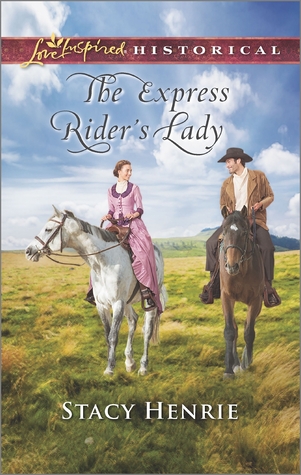 Delsie Radford is going to make it to California, no matter the danger or difficulty. Her father may have kept her and her sister apart, but Delsie refuses to miss her sister's wedding—even with only eighteen days to get there. And she's found the perfect escort in Pony Express rider Myles Patton.

Myles can't believe it when a pretty socialite hires him to take her cross-country through rough terrain and dangerous territory. Surely she'll quit before they reach their destination—he's known girls like her before. But the longer they ride together, the more Myles notices Delsie's toughness and kindness beneath her polished exterior. And though they may be worlds apart…they might just be perfect for each other.

My Thoughts: The Express Rider's Lady started off well. The premise was not one I had heard of before and, while it did seem a little far fetched, it was fun and interesting. I liked Delsie's determination to make things right with her sister and her willingness to do most anything to make it happen.

The middle started to lag for me. Within the story, Myles seemed to change his opinion of Delsie fairly early on and then just decided that he was not the right kind of man for her. *SPOILER* While there was some tension in the idea that Delsie would not marry against her father's wishes, it frustrated me that she was willing to defy her father in order to travel across country on horse back to see her sister for a day, yet she was not willing to do the same for the man she loved. *END SPOILER* There were also some interactions with Indians in which I was able to predict the entire interaction because it was the same as I have seen many other times before.

Near the end, after Delsie has returned home, the story picked back up. Here, Delsie showed more of the same spirit she started off the journey with and Myles has learned to be content with life. I liked how the story ended and if the middle had played out similarly, I would have enjoyed the story far more.

I received this book through Prism Tours in exchange for an honest review.

Stacy Henrie has always had a love for history, fiction, and chocolate. She earned her B.A. in public relations before turning her attentions to raising a family and writing inspirational historical romances. Wife of an entrepreneur husband and a mother to three, Stacy loves to live out history through her fictional characters. In addition to author, she is also a reader, a road trip enthusiast, and a novice interior decorator.